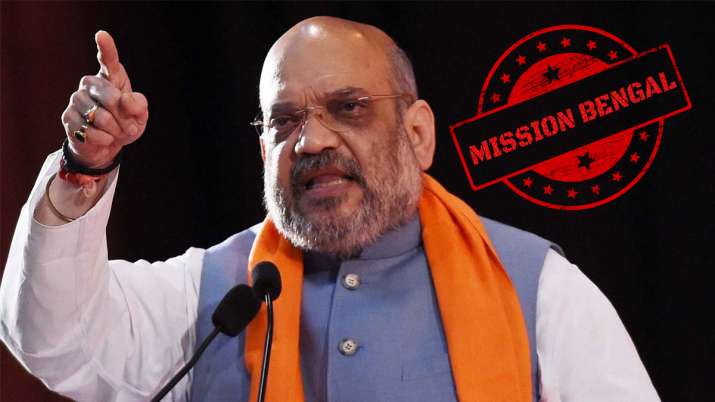 Union Home Minister Amit Shah on Sunday put an finish to the “insider-outsider debate” in West Bengal and promised that “a son of the soil will become the chief minister” if the Bharatiya Janata Party (BJP) was voted to energy in the state. Shah, who was on a two-day tour in Bengal, slammed the Mamata Banerjee authorities over the latest assault on BJP chief JP Nadda’s convoy and asserted that the Centre had the proper to summon state IPS officers accountable for offering him safety for central deputation.

Shah, who was addressing a press convention in Bolpur, alleged that Banerjee had failed to regulate the legislation and order scenario in the state, which was quickly falling on all improvement indices.

“The Centre is well within its rights to send a letter (summoning IPS officers for central deputation) to state government…if they have any doubt they can go through the rule book,” Shah mentioned.

The prime BJP chief additionally mentioned the ruling TMC was raking up the “outsider-insider” debate to divert public consideration from the failures of the state authorities.

“I think Mamata di has forgotten a few things. When Mamata di was in Congress did she call Indira Gandhi an outsider? Did she use the term for Prime Minister PV Narasimha Rao? Is she trying to create a country where people of one state are not allowed to enter in other states,” he requested.

Attacking the Mamata authorities over Bangladeshi infiltration, Shah mentioned the TMC can by no means cease infiltration because it believes in appeasement politics. Only BJP can cease it, he mentioned.

Responding to a query on the CAA, Shah mentioned the guidelines for implementation of the Citizenship (modification) Act will be formulated after the COVID-19 pandemic is introduced underneath management. “Because of the corona, such a massive process cannot be carried out. As soon as COVID vaccination starts, we will discuss it,” he mentioned.