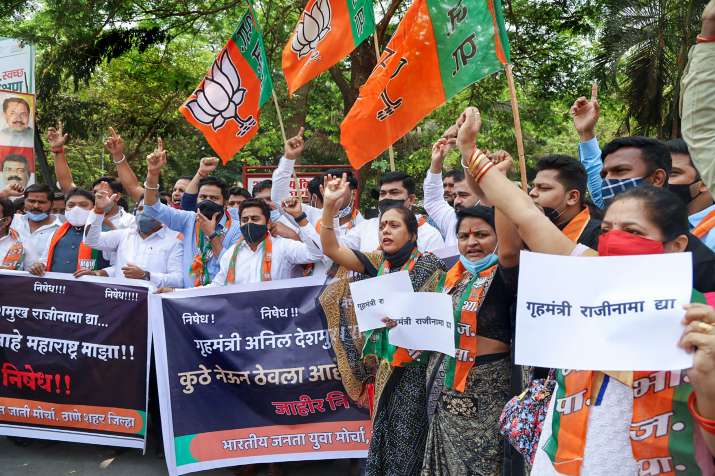 NCP state chief Jayant Patil on Sunday stated there was no question of Maharashtra Home Minister Anil Deshmukh resigning. The minister’s assertion got here towards the backdrop of ex-Mumbai police chief Param Bir Singh’s corruption allegation. He had claimed that Deshmukh needed cops to gather Rs 100 crore month-to-month from bars and motels in Mumbai.

Patil, a senior minister within the Maha Vikas Aghadi authorities, stated there was no must divert consideration from the principle incident of bomb scare outdoors Mukesh Ambani’s residence and the killing of Mansukh Hiran, a Thane-based businessman. “The focus is on these two occasions and after that applicable steps can be taken, Patil stated following a three-hour meeting held at NCP chief Sharad Pawar’s residence in Delhi.

During a media briefing earlier within the day, Pawar stated Maharashtra Chief Minister Uddhav Thackeray will resolve the destiny of Deshmukh. His feedback got here amid hypothesis in Maharashtra political circles that the state could quickly have a brand new house minister.

The allegations levelled by Singh towards Deshmukh are critical and require an in-depth probe, Sharad Pawar stated.

Singh, a senior IPS officer, who was transferred to the low-key Home Guards on March 17 following the arrest of police officer Sachin Waze within the case associated to the bomb scare close to Mukesh Ambani’s home Antilia, in a letter to the Maharashtra chief minister had claimed that he was made a scapegoat.

In the eight-page letter to Chief Minister Thackeray, Singh alleged that Deshmukh used to name cops to his official residence and provides them a “collection target” from bars, eating places and different institutions.

The Maharashtra Chief Minister’s Office, in a launch on Saturday, stated Singh’s “unsigned letter to Thackeray” was not despatched from his official electronic mail ID and efforts have been on to contact him to confirm it. (With PTI inputs)

Why does SP’s name gets dragged into every incident of crime?...